In my last post, I detailed my experience with the Vegan Starter Kit from Gobble Green.  This company provides vegan meal plans and a la carte food items online to be delivered nationwide.  I ended up purchasing two discounted Vegan Starter Kits from two different group coupon websites.  Here is my second week.  Just like the first week, I received three meals and a dessert each day for 7 days for $99 (a value of $225).  Also, just like the first week, it came with a sheet indicating which meal should be eaten when.  Although this is optional, I followed the sheet. 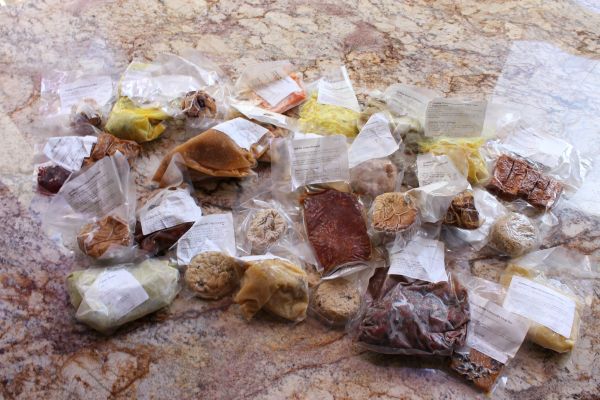 Breakfast was a Blueberry Muffin.  I normally don’t eat a lot of muffins.  I find them to be high in calories and for only a few more calories, I can have a cupcake.  But I do like muffins, and this one was very tasty.  It was a little doughy, but I liked it. 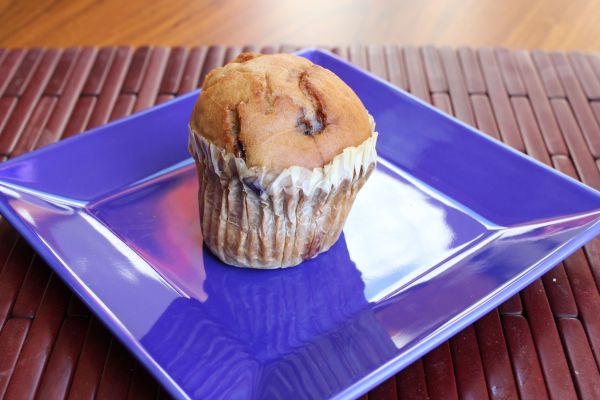 Lunch were some Coriander Courgettes.  This had chunks of zucchini (which I don’t like and didn’t eat), peas, and rice.  Even without eating the zucchini, there was still enough to eat.  I thought the taste was decent. 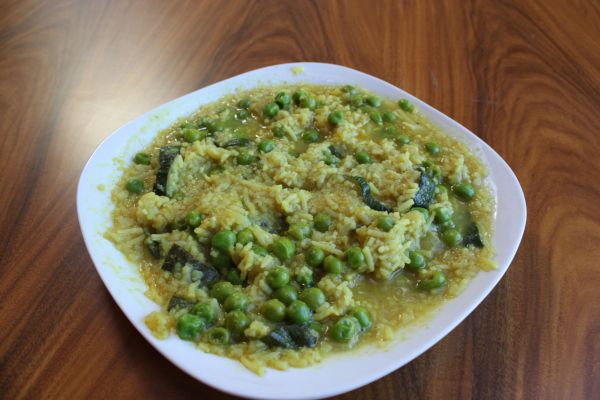 Dinner was a Festive Seitan Stir Fry.  I thought this was very flavorful and moist.  It didn’t have much sauce, but I didn’t think it needed it. 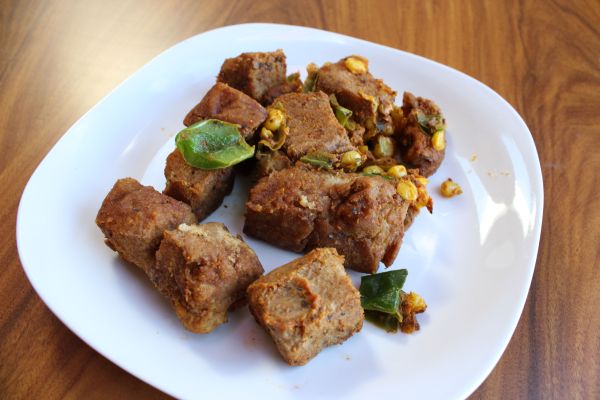 Dessert on Day 1 was a Fruit Salad.  When I saw this on the sheet that lists out the meals, I thought how wonderful it was that they were trying to incorporate more fruit.  Unfortunately, this fruit salad consisted of about 7 very tart berries.  I guess it was the thought that counts. 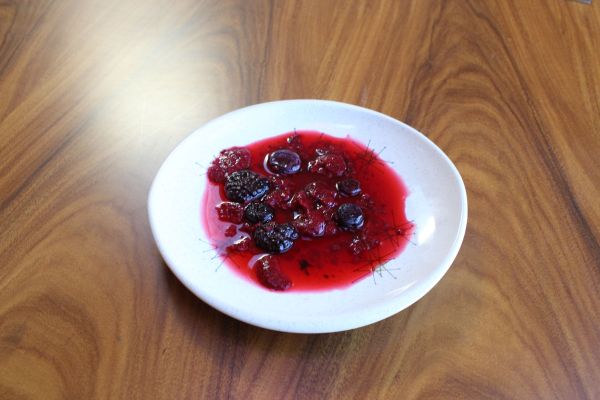 Breakfast was another Blueberry Muffin.

Lunch was Vegetable Paella with “Chicken.”  I was excited to see the variety of ingredients, but thought the flavor was just ok. 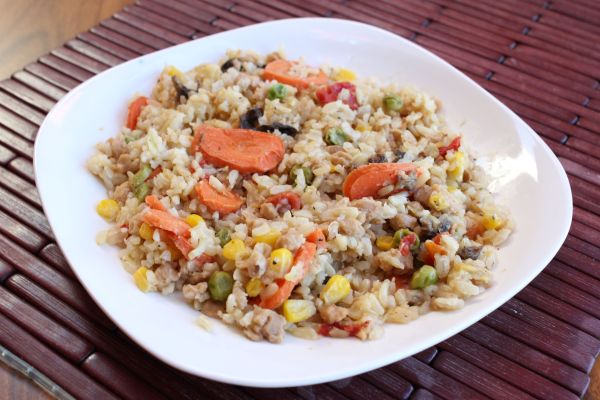 Dinner was an African Medley Stew.  To me, this soup was way too spicy.  I ended up only eating some of it and throwing the rest out, because of the spiciness.  People who love to mix in the super spicy hot sauces may disagree with me, but I think meal services should just stick to average levels of spice.  Those who like spicy probably have hot sauce at home, but those who don’t like spicy can’t take the heat out once it has been mixed in. 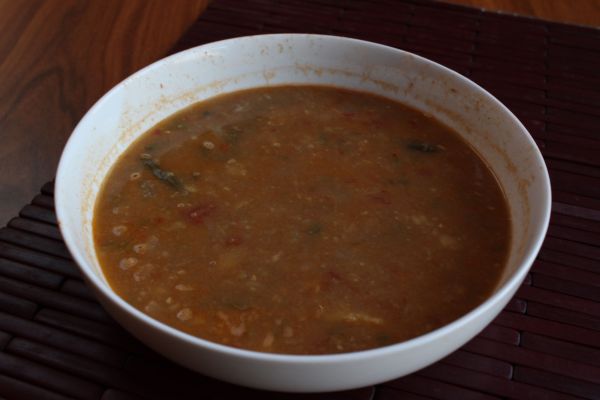 Dessert was a Sweet Carrot and Coconut Scramble.  This was just carrots, coconut, and agave.  I thought it was simple and good.  It was more of a subtly sweet dessert than a sugar-filled one. 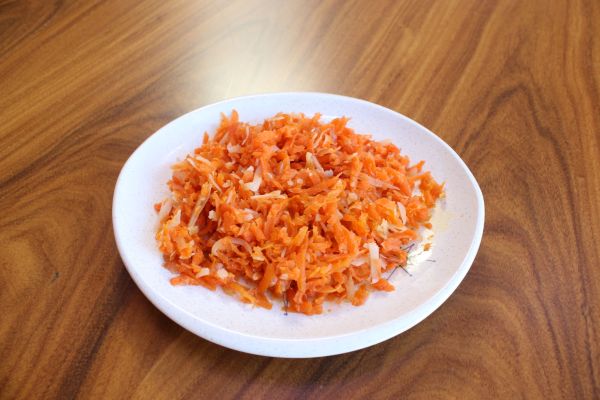 Breakfast was a Mushroom Scramble with “Cheese.”  I was disappointed that I only got two tiny pieces of mushrooms, but I did really like this one.  It may have been a bit heavy on the Daiya vegan cheese, but it still had some great flavor. 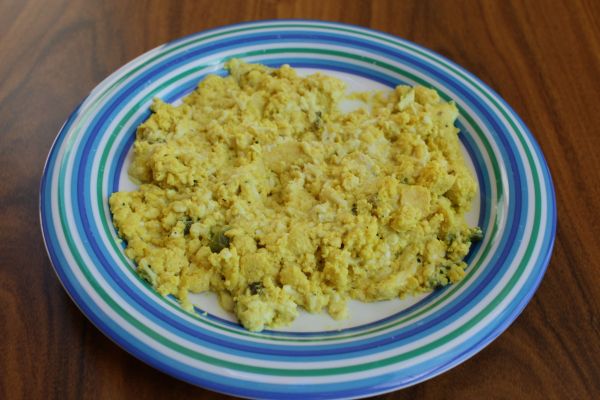 Lunch was a Lentil Cauliflower Curry.  I had this dish during my first week and thought it was a bit mushy (something I attribute to having to re-heat cooked lentils).  This week I thought it was still a bit mushy, but also really watery and with a different flavor than before.  It surprised me that the two dishes could be so different. 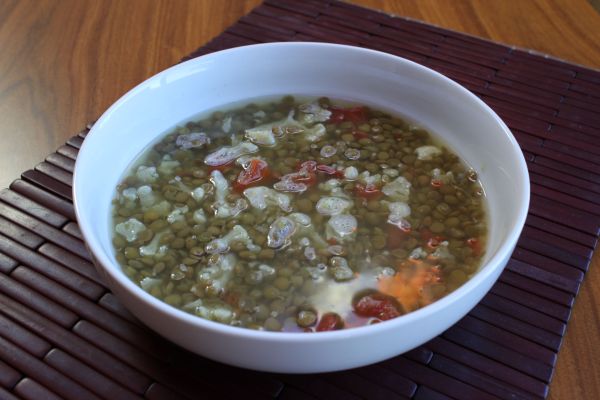 Dinner was a Baked Vegetable Sandwich.  I really liked this one.  It was like a pizza sandwich.  It was very doughy (but I like it that way) and filled with a plethora of vegetables and Daiya cheese.  I’d love to eat this one again. 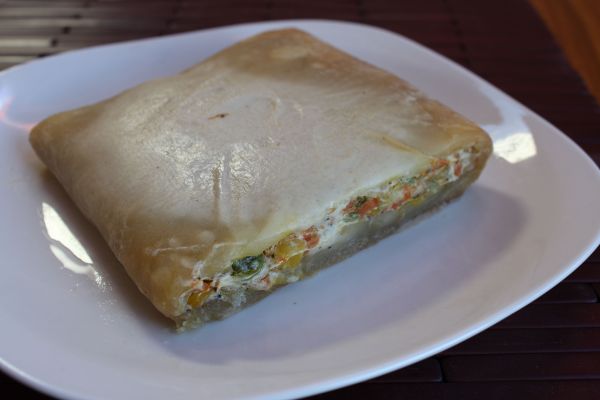 Dessert was a Snickerdoodle Cookie.  I loved the Snickerdoodle Cookie from week 1, but somehow this batch of cookies came out different.  I thought it was too oily – when I defrosted it in the microwave, lots of the oil oozed out of the cookie onto the plate.  Probably just an accidental measurement mistake in the baking department (or at least I hope!). 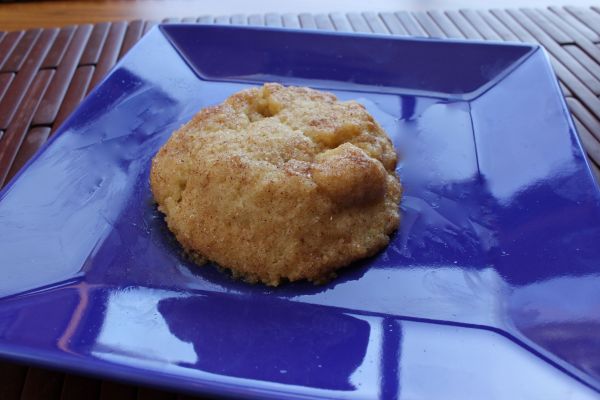 Breakfast was Scrambled “Eggs.”  Unlike the tofu scramble from the day before, this one was very bland and had a very dried out tofu texture.  I ended up adding some extra ingredients I had on hand in my fridge to liven and moisten it up: black beans, Teese vegan cheese, and some Vegenaise.  It made it better. 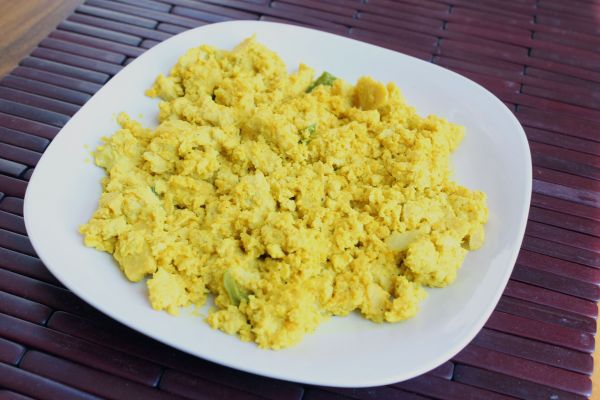 Lunch was BBQ Seitan.  Just like in week 1, the BBQ Seitan was very dry and needed some more sauce.  I don’t know what they are doing to this seitan dish that differs from the other seitan dishes, but this seitan is the only one that gets dried out.  Weird. 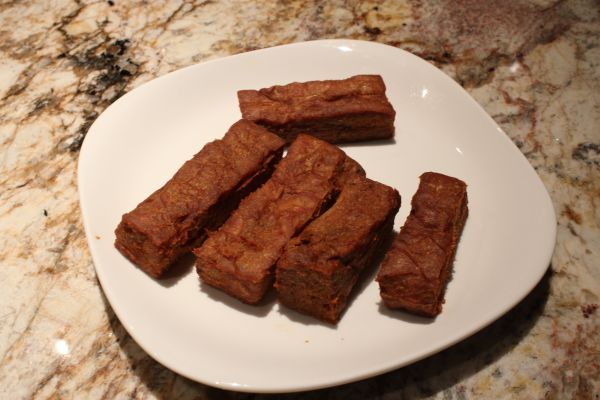 Dinner was some more seitan: Szechuan Seitan and Broccoli.  Unlike lunch, this seitan was moist and flavorful.  But just like week 1, I thought it could use more sauce and more broccoli florets. 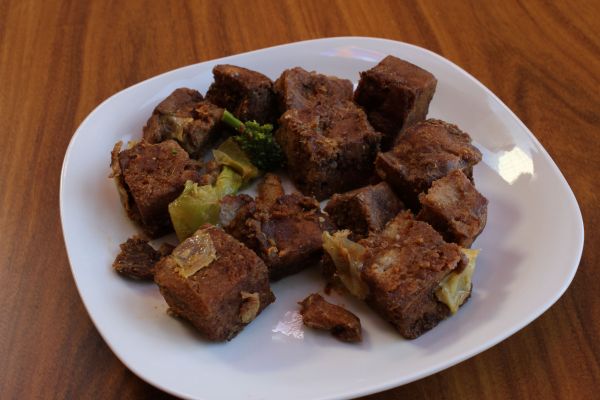 Dessert was an Oatmeal Raisin Cookie.  I got two of these during week 1 and neither had any raisins and were smaller in size. I was excited to see that this one had many raisins; however, it still easily fell apart (I believe it is gluten free).  It also was a bit too sweet – and I like things uber sweet. 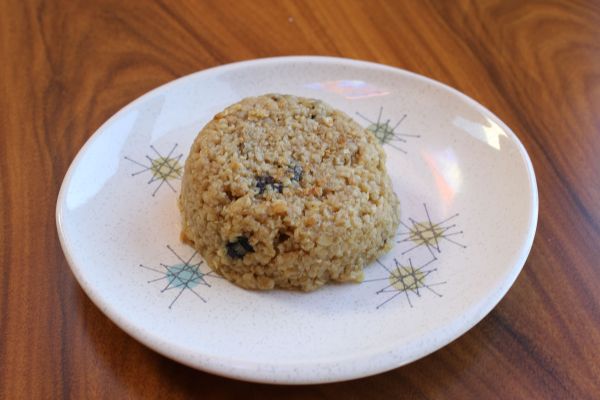 Breakfast was a Lemon Poppyseed Muffin.  I’m not a huge fan of lemon flavored foods, but I thought this was only lightly lemon flavored.  I really liked it. 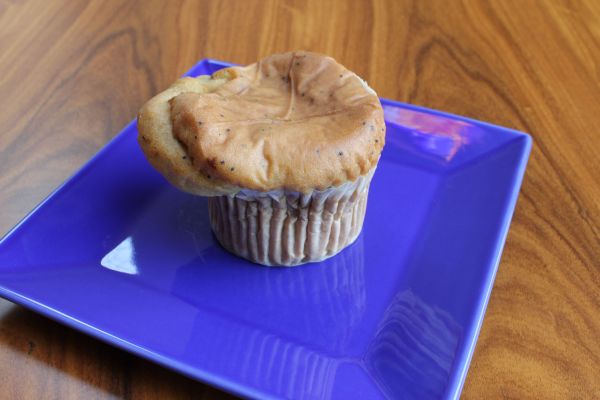 Lunch was another dish I had in week 1: Caramelized Tofu with Vegetables.  Looking at the pictures, one can see how different these look in the different weeks.  Like week 1, the tofu was chewy.  This week, it was very heavy on the soy sauce and black pepper.  I wasn’t a fan. 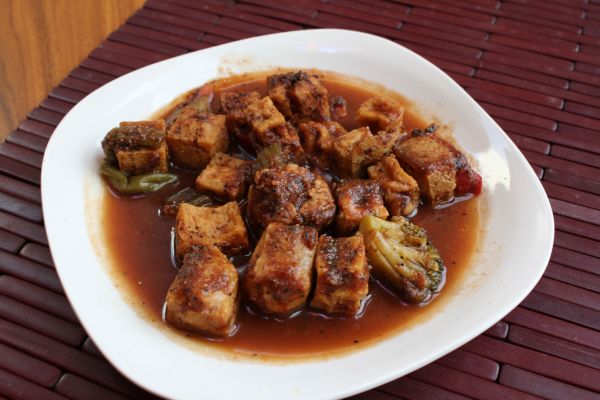 Dinner was Cashew Pesto Pasta.  This was one of my favorites in week 1 and it was just as delicious in week 2.  I loved the creaminess and the addition of broccoli. 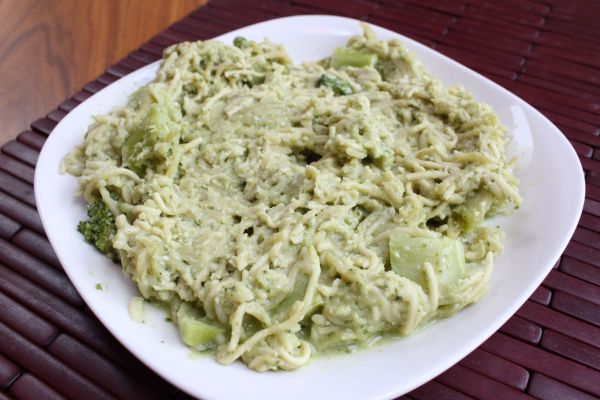 Dessert on Day 5 was a Chocolate Chip Cookie.  I warmed this in the microwave, which left it gooey and wonderful.  This cookie was definitely not gluten free – it held together beautifully. 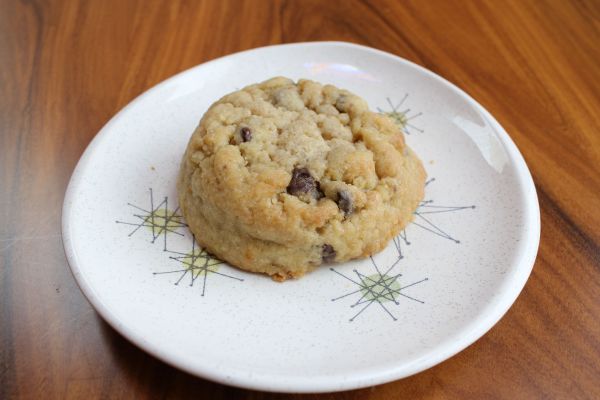 Breakfast was a Biscuit.  I like their biscuits, but still agree with my first post that this is not one of the most “nutritionally balanced” meals.  Just like week 1, I turned it into a PB & J. 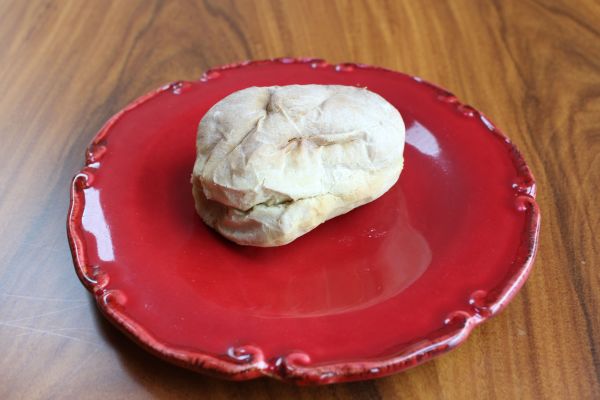 Lunch was “Meat” Loaf.  This meat loaf included some protein packed quinoa, which I thought was a nice addition to the texture of the dish.  However, I thought the flavor was just ok.  I’ve actually cooked some better tasting meat loafs, but still didn’t mind eating this one. 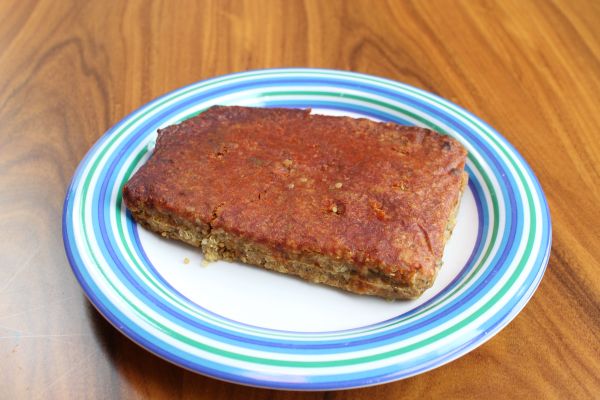 Dinner was Thai Vermicelli.  When I hear “vermicelli” I think noodles, but I didn’t see any whole noodles in this dish.  If they were there, they had broken down and turned into mush.  It was also very watered down and didn’t have much flavor.  I don’t like to waste food, but I ended up not finishing this one. 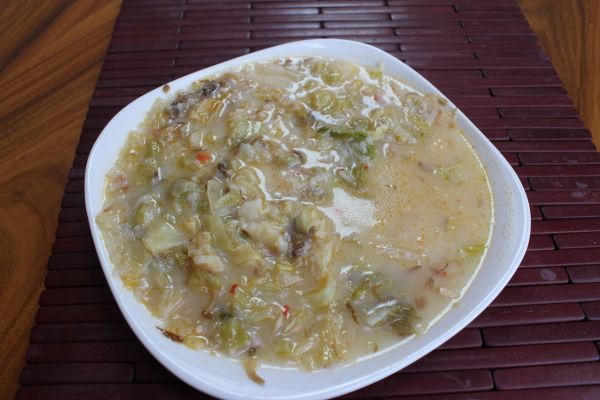 Breakfast was another Lemon Poppyseed Muffin.

Lunch was another one of my favorites from week 1: Macaroni and “Cheese.”  This week, I thought it was still good, but also thought the noodles had been overcooked (they were falling apart) and it had a different flavor than before.  I’m still very surprised that a few dishes I had in week 1 taste and look different in week 2.  I hope they can figure out what’s going on and try to make their product more consistent. 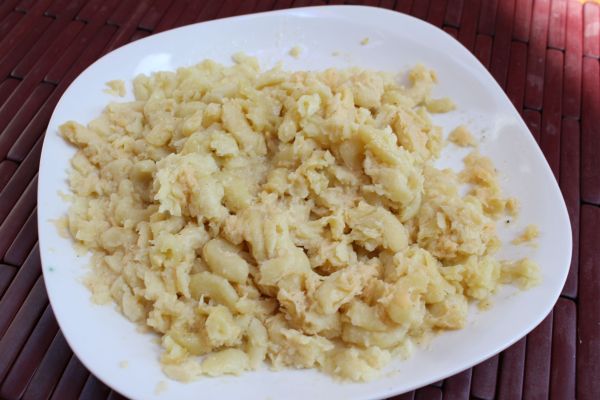 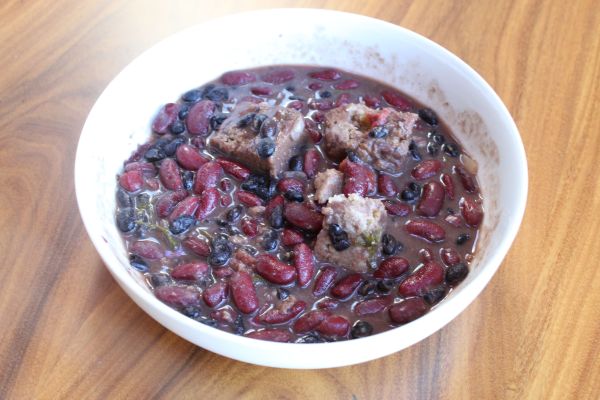 Dessert on my final day of Gobble Green was a Peanut Butter Chocolate Chip Bar.  This thing was gooey and great.  It was like they added just enough ingredients to peanut butter to make it hold into bar form and then made it even better by adding some chocolate chips to it.  This was by far the greatest day of meals (flavor-wise) in the two weeks I ate Gobble Green’s meal plans. 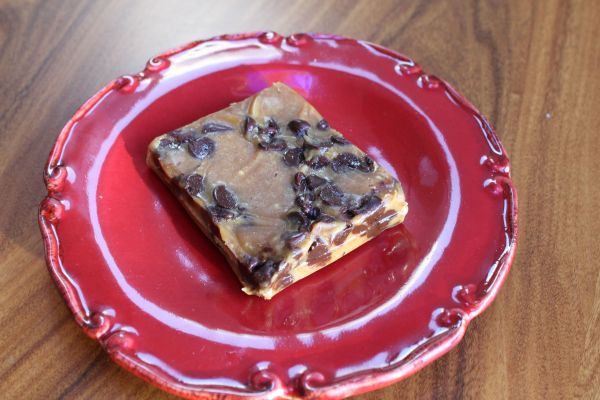 Again, I still feel like paying $99 makes this meal plan worth the money, but not $225.  I cook a variety of foods and spend less than that on groceries per week.  Just like week 1, the meals were small; however, week 2 did offer more variety in the meals.  I was excited to see they tried to add more fruits and vegetables this week, but I still feel that the claim “three gourmet, nutritionally balanced meals” is one they should not be making for the Vegan Starter Kit.  I did look through some comments on their facebook page and saw that Gobble Green had mentioned the Vegan Starter Kit included more comfort food based meals and less vegetable based meals – something they say will help wean those omnivores that bought the kit from a group coupon site to a vegan diet.  Makes sense.  Other full-priced meal plans, they say, are more vegetable based.

I know both my reviews were more on the negative side, but I really hope people buy Gobble Green’s products and help support this company.  I can only imagine how hard it is trying to figure out meal plans that include foods that can be easily frozen, shipped, re-heated, and still taste great.  Not to mention trying to have a variety of foods that include all the nutritional food groups.  I see the value of this company for those vegans, gluten sensitive peoples, or those aspiring to eat less meat and be healthy that live outside major metropolitan areas or with busy schedules.  Gobble Green has over 12,000 people liking their facebook page, so I’m very glad they have gotten their name out there and hopefully gaining many customers.  My opinion on their food is just one and I encourage you to make your own.