Vegans try and replicate everything we used to eat as omnivores.  Enter: Vegan Caviar (aka Cavi-Art).  I’ve never even had real caviar (fish eggs were never at the top of my list of things to eat).  I have no idea how this compares to the real stuff, but I just know that the vegan version of it was not to my liking.  And maybe it tastes like what it’s supposed to be (maybe I wouldn’t have liked fish caviar if I had tried it) – who knows?  It’s made of seaweed, so it has that “fresh from the ocean” flavor.  In fact, when I took a bite of the stuff on crackers it tasted like I had swallowed ocean water.  Not that pleasant.

I even tried to bring crackers and pawn it off on friends at a dinner, but couldn’t get rid of the stuff.  Some people tried it, but it was only a small amount.  Once you have a small taste of it, you are good to go.  Now what am I going to do with the rest of these two jars?  Oddly enough, the Cavi-Art website has a bunch of recipes that use their product.  Too bad all of them are full of animal products!  One friend recommended I use bits of it in sushi.  Maybe I’ll give that a go.

What do you think?  Have you had this product?  What recipes have you used with it?

A quick review for Day 8 of Vegan MoFo:

I’m a sucker for deals, so when an offer hit the web for a sample of vegan raw chocolate from Cloud 9, I had to get it.  I’ve calmed down with purchasing discounted goods a lot since this deal went out.  For awhile there, I had more food than I could eat.

I understand the benefits of raw foods, but I just can’t get on board with raw chocolate.  It’s way too bitter for me.  I think I’ve finally learned my lesson to stop ordering it.  I’m thinking that the only way I’d learn to love raw chocolate is if I never ate sweetened foods.  Then maybe my taste buds would find the raw chocolate pleasant.  But, something tells me I won’t be giving up my vegan cakes and ice creams anytime soon.

As for the goods, I only had a very tiny sample of each flavor and then gave the rest away. 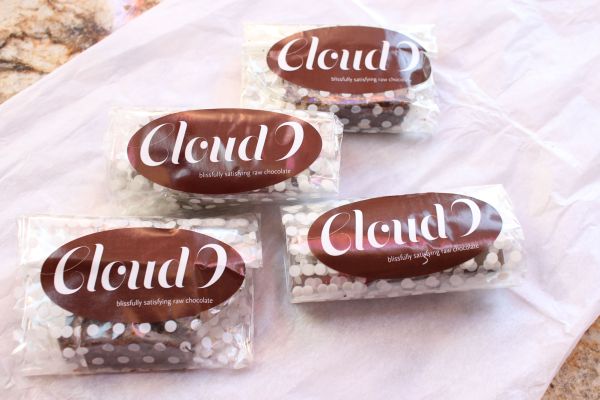 The better ones would be the Macadamia/Goji and Cranberry/Pecan, because the sweetness of the fruit helps balance out the bitterness of the chocolate.  I couldn’t handle the bitterness in the Walnut and Original at all. 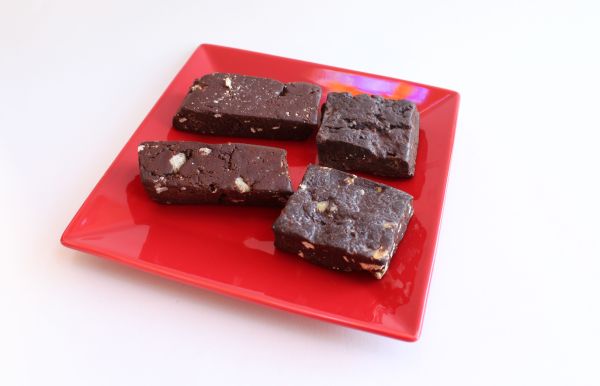 If you like really bitter chocolate, go get some of this.  It has some great nutritional qualities for a candy bar and I hear quite a few people liked it at Natural Products Expo East.

A while back I got a sample of products from Vegan Divas in New York City.  I was curious if a freshly baked product can make its way to the west coast and still taste good.  Did it?  Read on.

I got three different Baked Doughnuts – I’m a huge Homer Simpson and was really excited about the doughnuts.  The Toasted Coconut was very moist, but I thought it had an aftertaste – maybe the baking soda?  The Chocolate Iced was also moist – although not as moist as the coconut – and had a nice flavor.  Last, the Cinnamon Sugar was kind of plain for my taste.  Not too much to it.  The quest for an awesome donut I can get in SoCal (or mailed to me) continues…

I liked the other goodies better than the doughnuts.  First were some Chocolate Chip Cookies made with spelt flour. At first glance, these looked thin and crispy.  I was pleasantly surprised to find that these were thin and soft.  They had a very nice flavor and had just the right amount of chocolate chips.  Spelt products have really taken a turn for the better.

Another goody was the gluten free Macaroons. I normally don’t like macaroons, because every one I’ve had has been wet and full of long strands of coconut (ew).  This one reminded me more of a cookie.  The chewier texture was a delightful surprise – score for the coconut!

Lastly, I tried the Spelt Brownie.  This is a stick-to-the-roof-of-your-mouth kind of brownie.  Luckily, it wasn’t a bitter tasting brownie, but still wasn’t my favorite.  I’ve had some better vegan brownies, but I also would not be disappointed had I ordered this for dessert at a restaurant. 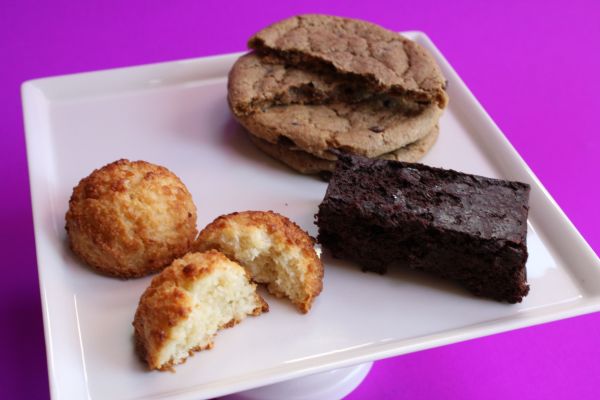 You can order these goodies and more at their website.  Some items are only available for delivery in Manhattan, though.

Have you seen those single servings of cheesecake in your local natural foods market?  Chances are, they are from Earth Cafe.  I know they are a bit pricey, but it’s worth a try.  I once brought some samples to my male meat-eating co-workers and they thought it was delicious. These cheesecakes are totally raw and primarily nut based.  I went on a little splurge (what’s new?) and bought one of those group coupons for two cheesecakes at a discounted price.  Since I’ve purchased mine, I’ve seen this discount come up a few times (be on the lookout, my cashew-loving friends).  Gathergreen is a good one to follow (in fact they are running the deal right now).  The cheesecakes freeze well – bonus if you don’t have a need to eat an entire cheesecake at once.  Because I’m very indecisive, I got the Sampler Cheesecake. 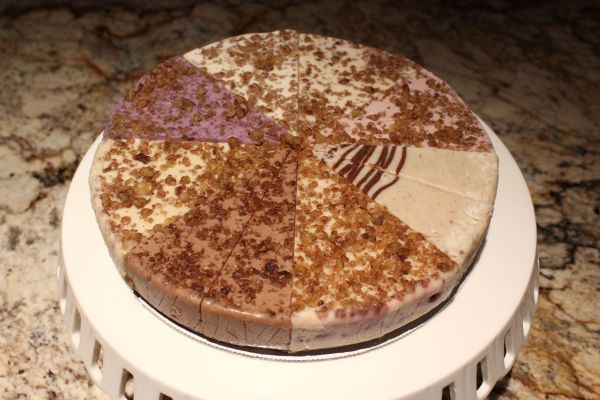 From front to back: Strawberry (my favorite!), Vanilla (creamy – your basic flavor), Chocolate (just the right amount of cocoa – not bitter at all), Lemon (way too tart for me), Blueberry (very blue, but a very mild blueberry flavor), Raspberry (creamy on the outside – just enough tart on the inside), Coconut (strong coconut flavor – me likey), and Blackberry (same idea as the Raspberry flavor, but with a less tart center). Another thing I noticed was the crust was too salty for me.  I’ve had the single serving packages in the stores and never found them to be too salty.  I’m hoping someone just got carried away with the salt when making this batch of crust and they didn’t change their formula for good.

I think I’m good for awhile on the raw cheesecakes.  I ended up having my vegan guy taste some and I gave most of a cheesecake to my family, but I ended up eating a little more than an entire cheesecake by myself.  In about a week.  Glutton.  I know.  And I’ve learned my lesson.

Kat’s Hot Cakes may be based in Michigan, but you can order their goodies online and have them sent to you.  I recently had a Sample Pack sent to me and here’s a quick review of what I thought. 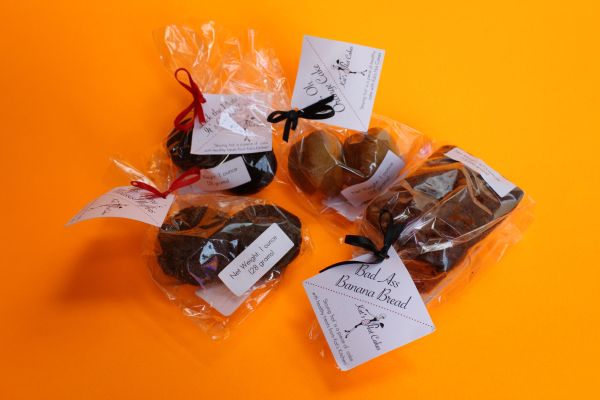 As a baker, I know the difficulties in sending baked goods.  Add frosting to those baked goods, and it is nearly impossible to get those goods to the recipient in tact.  I write this to say that I understand why Kat’s left the frosting on the side.  I was given just one frosting for both cake flavors:  Carob Frosting.  I am not particularly fond of carob, so the frosting didn’t grab me.  I get that the carob frosting would go with the Lick the Plate It’s Carob Cake, but I don’t think it went well with the Oh, Oh Orange Cake.  Again, the carob in the carob cake didn’t grab me, but the orange cake had a nice flavor.  Both cakes were a little dry – which I know will happen when time passes during transit – so I won’t fault Kat on that.  I was a little disappointed that the orange cake didn’t come with the frosting meant for it, though.

The third little cake in the picture is a Ms. Berry’s Molasses Muffin.  I’ll admit that I don’t like molasses a whole lot, but these weren’t overly molasses-y.  It was super moist and full of sweet raisins.

The last was my favorite: Banana Bread.  This was still very moist and perfectly banana-y. It held together beautifully and contained a good amount of walnuts.  If you live far from Michigan, I’d suggest ordering this one – it keeps the best. 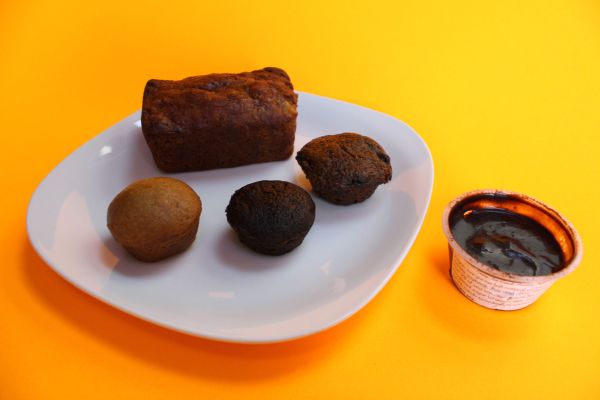 In my last post, I detailed my experience with the Vegan Starter Kit from Gobble Green.  This company provides vegan meal plans and a la carte food items online to be delivered nationwide.  I ended up purchasing two discounted Vegan Starter Kits from two different group coupon websites.  Here is my second week.  Just like the first week, I received three meals and a dessert each day for 7 days for $99 (a value of $225).  Also, just like the first week, it came with a sheet indicating which meal should be eaten when.  Although this is optional, I followed the sheet.

END_OF_DOCUMENT_TOKEN_TO_BE_REPLACED

If you get emails from any sort of group coupon site that offers daily deals, you may have seen Gobble Green offering their vegan meal service.  This fairly new vegan company offers meal plans and a la carte foods shipped to you nationwide from their kitchen in Los Angeles.  The deal running on these group coupon sites is a hugely discounted Vegan Starter Kit.  When I bought mine, I got it for $99 (a value of $225) – shipping included.  It was shipped to me in an insulated container with dry ice to keep the foods as cold as possible.  All foods are to remain frozen until eaten.  This vegan starter kit included three meals plus dessert each day for 7 days.

END_OF_DOCUMENT_TOKEN_TO_BE_REPLACED

I’m not that into Easter, but I’m very into Easter candy.  Luckily for vegans, many companies now create cute little treats in vegan varieties.  Sjaak’s is an awesome company making some of those vegan candies.  I ordered two kinds of Easter themed chocolates from Vegan Essentials recently.  Wow!  Both were really good!

First was the Vegan Milk Chocolate Almond Butter Easter Bunny.  So adorable!  It’s a small bunny (1.1 oz) and can be eaten in one-three bites.  Sjaak’s vegan milk chcolate is divine!  Just how I remember dairy milk chocolate.  The almond butter inside was creamy and a perfect complement to the vegan milk chocolate.

Wanting more, I opened up the second chocolate candy I ordered: Chocolate Easter Egg Filled with Crunchy Peanut Butter.  Again – petite (2 oz) and adorable!  Both of these would be perfect in an Easter basket for someone special!  The vegan milk chocolate was still wonderful and the crunchy peanut butter was great at adding some texture to the treat.  I’ll have 1,000 of these, please!

Unfortunately, I just checked out Vegan Essentials website and they are no longer offering these products.  Sjaak’s website is sold out of the Easter Eggs, but still has the almond butter bunnies here.  Get them while you can!!