Los Angeles is home to a number of vegan Thai places that have the same crazy menu of thai food and burgers/wraps.  I guess the owner of Thai Vegan in Albuquerque (a native of Thailand) came to the desert via the City of Angels, because the menu here has that same crazy menu.  There are a few items I haven’t seen in LA, but, in general, it’s the same thing.  I love vegan thai food and I might have even thought that Thai Vegan in Albuquerque was slightly better than some of the places in LA.

We also got an appetizer of the Chicken Satay ($6.95): charbroiled marinated soy chicken on skewers, served with peanut sauce and fresh cucumber salad.  Peanut sauce is one of my favorite sauces.  This whole plate was delicious!

One dish I’m not so sure if I’ve seen very often was the Chu Chee ($9.95):  soy shrimp sauteed in our chef’s special coconut puree, topped with daffir lime leaves and bell pepper.  This had quite a few bell peppers and onions, which I didn’t eat, so I mainly got a lot of soy shrimp.  I really loved the sauce it was in.  It tasted like a coconut curry 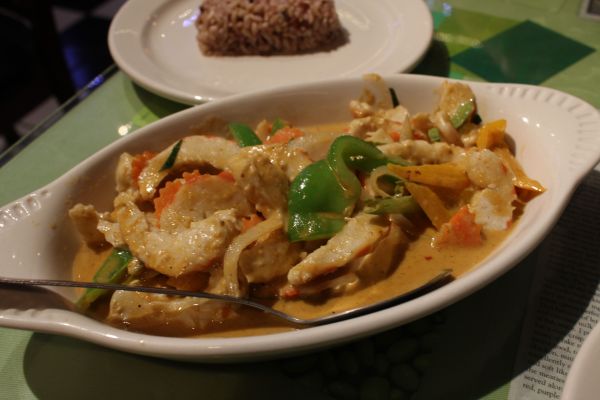 Because we love that peanut sauce so much, we got the Praram’s Plate ($9.95): marinated soy chicken pan-fried with peanut sauce on a bed of steamed spinach.  Peanut sauce and spinach?!  I think this was the favorite item of the evening.  It was so flavorful – and we got your greens, too! 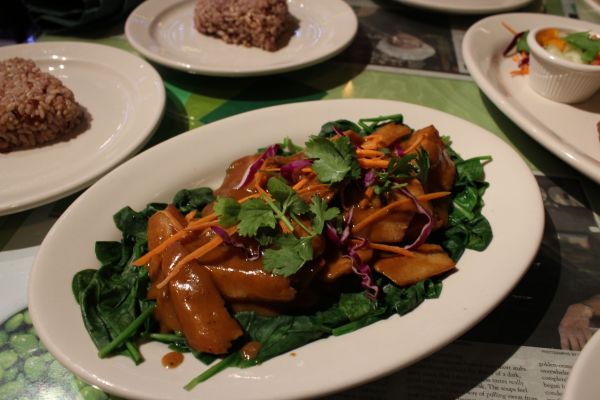 In addition to peanut sauce, I love glass noodles.  Something about that tiny noodles just tastes so good!  This dish isn’t on their online menu, but is on the paper one in the restaurant.  I forget what this is called, but is the only glass noodle dish at the place.  It was packed with flavor.  We didn’t eat all of this dish, so I took it with me to eat for breakfast the next day.  Who knew glass noodles could be so good for breakfast?

They also have a few dessert items.  We each decided to wash everything down with some ice cream.  My mom got the Coconut and I got the Green Tea Ice Cream ($3.25 each).  Both were tasty, but the texture was a bit off.  It was kind of grainy – not too appetizing for an ice cream.

I know we have a ton of these type places in LA, but if you happen to be passing through Albuquerque, Thai Vegan is worth the stop.