Let me begin this post by saying that there will be VEGAN DONUTS today!  And not just one place will have them.  Is your mouth watering yet?  Good.

After dinner, we stopped by the Sacramento Whole Foods to get dessert – and that’s where I spotted them waiting for me in the bakery section.  These gems are the creation of Posh Bakery – a wholesale only bakery in the Sacramento area.  The donuts were good.  It was late at night and they had been sitting all day, so they got to be a little dry – I still ate them, though.  The Blueberry Donut was my favorite.  It held its moisture the best, whereas the Chocolate-Nut Donut and Sugar Donut didn’t.  I also got a Whole Foods Chocolate Cupcake which was actually pretty disgusting, so don’t get it.

I had to wait until morning for my next donut fix.  Doughbot Donuts is this little shop that has daily vegan flavors alongside the regular donuts.  Of course I’m going to try one (or two) of each flavor and this was what was being offered the day I went in ($18 for the dozen).  The donut base was the same for each donut and it had a slight gummy texture.  All-in-all, though, I would happily eat another dozen of these, but I still like Ronald’s Donuts in Vegas better.

(clockwise in the picture from top left) Raspberry Donut had the perfect amount of tart glaze
Maple Donut was my second favorite with just the right amount of maple flavor
Vanilla Donut was my number 1 – call me boring
Pink Lemonade Donut had a pretty tart lemon glaze with the raspberry drizzle (a nice pick-me-up in the morning)
PB&J Donut was what I was looking most forward to,  but was my least favorite.  I was hoping for a jelly filled donut with a peanut butter flavored glaze and not pure peanut butter slathered on a jelly donut.  Pure peanut butter is too heavy for a donut, in my opinion
Coconut Cream Filled had a clumpy filling that made me not like the texture (although the flavor was good)

And for my (second) breakfast/lunch, we went to Sugar Plum Vegan.  As the name would suggest, this bakery/cafe is entirely vegan.  We came right when they opened, so I don’t know if they fill their bakery display case more (they should!).  They have some gluten-free treats in there – if you’re into that. 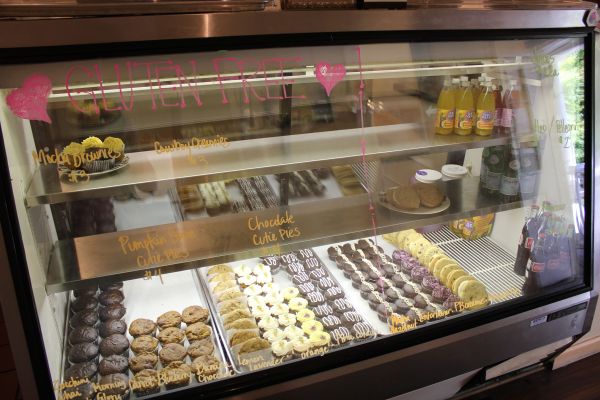 We did get some non-sweet foods to fill up for the long journey back to Southern California.  First – the Club Sandwich ($8).  This sandwich comes with tempeh bacon, Vegenaise, lettuce, and avocado on multi-grain bread.  It seems more like a BLT, but was still good. 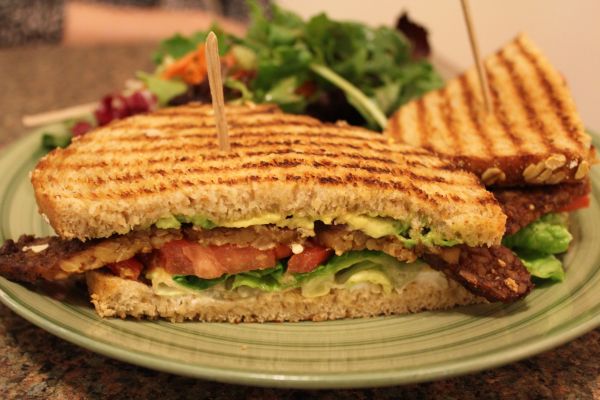 My favorite (and I think my sister’s) sandwich was the Reuben ($9).  This sandwich had tempeh bacon, avocado, sauerkraut, 1000 Island Dressing, and pickles on rye.  I took out the pickles and savored the sauerkraut – delicious! 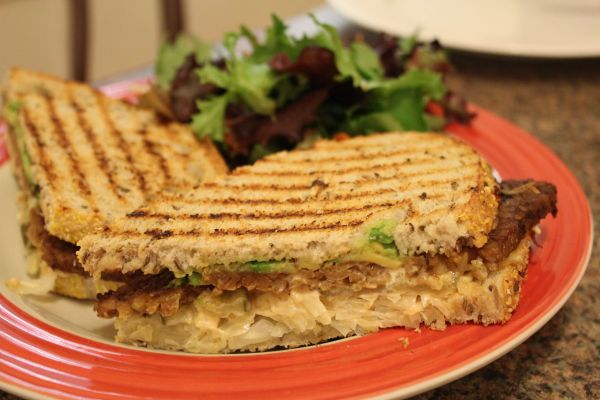 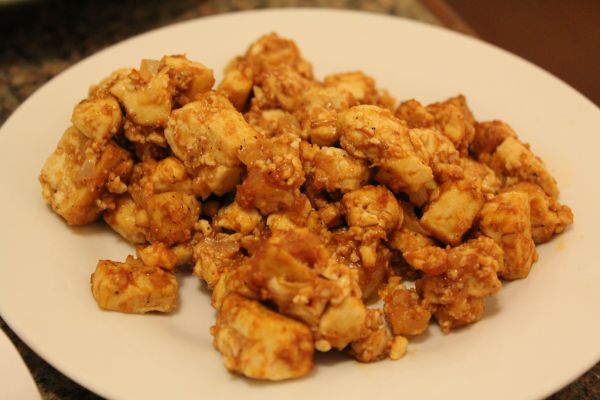 And the very best thing I ate at Sugar Plum was their Mac and Cheese ($10).  This was quite possibly the second best vegan mac and cheese I’ve ever had (LA based A Taste of Life still is #1)!  My sister and I loved it, but my mom was the exact opposite (I’m related to her?).  It’s made with gluten-free quinoa pasta and covered in the amazing sunflower cheese.  Who knew seeds could be so versatile?

And finally, I can’t leave a bakery without a sampling of their baked goods.  Sad to say I wasn’t overly enthusiastic with the goodies.  Getting the treats in the morning, I expect them to be super fresh, but I think these were baked the day before.  The Red Velvet Cupcake (with purple frosting?) and the Hostess-like Cupcake were really dry.  The Carrot Cake held moisture a bit better and was the best of the three cupcakes.  The Brownie had a nice fudgey flavor, but was a bit dry as well.  My favorite was the Chocolate Chip Cookie Sandwich filled with Peanut Butter Frosting.  This thing was good.  The only one I thought to not be dry.  I’d order that one again. 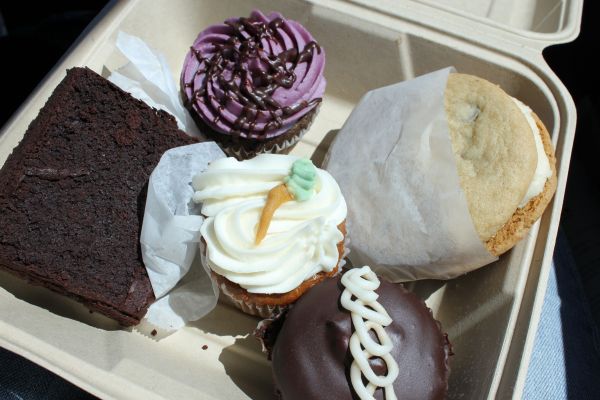