Real Food Daily is an all vegan eatery serving up healthy, organic food.  They now have three locations: Santa Monica, West Hollywood, and the newest in Pasadena.  My vegan guy and I used to go here often for their Sunday brunch, but when their tofu scramble portions got smaller and smaller, we stopped frequenting them as much.  The Santa Monica location has a full bakery attached to it that specializes in healthier-for-you desserts.  If you want to star gaze (or impress out of town guests) the West Hollywood location often has celebrities dining in.  I’ve often spotted one on a trip to their Sunday brunch.  Once, we sat next to Leonardo Di Caprio and Tobey Maguire (swoon!!)!  Sorry, vegan guy, but I’ve been in a relationship with Leo long before I met you.

And now back to the food.  I got the Breakfast Burrito ($13.75): whole wheat flour tortilla, scrambled tofu, tempeh bacon, spanish rice, black beans, onions, peppers, topped w/ ranchero sauce, cashew cheese, guacamole, pico de gallo with hash browns or fruit.  This thing is huge and (as you can see) loaded with goodness.   I got it with a side of hash browns, which were crispy on the top and softer underneath.  The tempeh bacon is too smokey for me at Real Food Daily, so I gave the side to my vegan guy.

My vegan guy went with his standard RFD brunch item: Ava B ‘n’ Cheez Scramble ($12.95): avocado, crumbled tempeh bacon, sun-dried tomatoes, cashew cheese (only he gets chopped tomatoes instead of the sun dried tomatoes).  It also comes with hash browns or fruit and a side of toast.  While it looks like a lot in the picture, it’s actually a bit small (especially for the price).  When you see that my meal was less than a dollar more, I would expect almost as much food.  It is still tasty food, but beware if you have a larger appetite.

I was so stuffed from my burrito, that I couldn’t eat anything more.  However, I saw in the bakery display case a glorious looking cheesecake, so I got it to-go.  The Caramel Pecan Cheesecake ($6.95) was nice and creamy.  I liked it, but my vegan guy thought the tofu flavor was too strong. 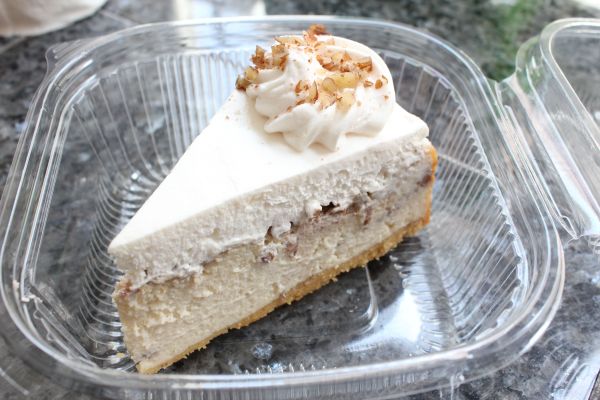 Check out their website to see which of their three locations is closest to you.